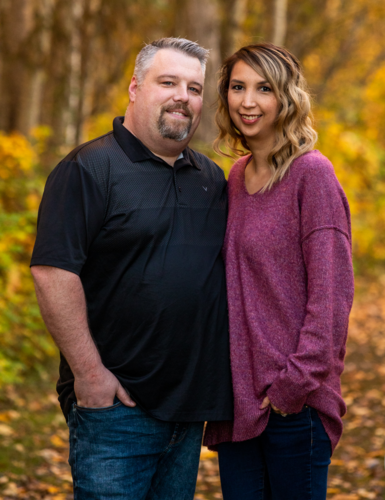 Chris & Anita Hicks are the Lead Pastors of Windword High Prairie. In the early stages of their Christian walk, Chris & Anita spent 4 years travelling with Evangelist John Okemow of All Nation Ministries. It was during this time that their passion and desire that sons and daughters of God would rise up to take their rightful place and walk in the calling that God has for them. For the 4 year duration of their time with John Okemow they were responsible for the filming and editing of a weekly television program.

In 2009 Chris & Anita felt that God was calling them to Slave Lake, AB. There they sat under the ministry of Pastor Harry Pretty of The Gathering Place. For the next 4 years they faithfully served in the church, looking after sound, livestreaming, web development, and even Janitorial duties. Chris was eventually placed on Staff as well as served on the Advisory Board.

In January 2013, they felt God speaking to them again, to relocate back to High Prairie to serve once again with John Okemow. Here they soon assumed the role of Youth Pastors. In late 2013 they were asked to assume the Lead Pastor role. After much prayer and seeking God, Windword High Prairie was birthed.

Chris & Anita operate in the prophetic and God has released a healing anointing upon their ministry. With biblical teaching, it is their desire to see the body of Christ, sons and daughters of God, rise to their true potential and operate in the callings that God has given them. They also believe that what happens within the church walls is only a fraction of ministry, therefore you will often see them performing outreach ministry, expanding the walls of the church to those who are in greatest need.